at the heights of low budget

You believe in destiny? Take this catalogue of Titanic Festival 2008 (not related to Cameron's great film) with over sixty films in it and while talking over a coffee you just point at Shotgun Stories' page saying, "yeah .., and I'd definitely like to see this one for example". After spending 3 minutes in the world of this film you already realize that this choice was just best destiny that ever can happen to you at a film festival.

This film strikes you almost immediately it starts out.

Whatever you had in the attic of your mind about how good a film should and could be they will be confirmed now. Shotgun Stories is just one of those finest films that you always knew it had to exist. Supposing you were fishing for something fresh, for a story that is different and for a story telling that makes a difference too Shotgun Stories will jst take good care of you.

It strikes you by its perfect simpleness, by its cool and low-key art of getting you on a trip. While most movies are based on extensity of motives that grab your attention like more cars, more girls, more action, more noise, more sex, your favourite ones will mostly be like the total opposite, meaning more space, more time, more angle for subtleties, more chance for you to focus and feel. Shotgun Stories becomes one of your favourite ones very quickly. It just offers you an open door to step in through but you'll be continuously fuelled (rewarded if you like) to keep moving.

Unlike “entertaining movies” which behave like sugar-spoiled children at stupid plastic contests in shopping mals desperately working for their15 seconds Shotgun Stories is very elegant about getting the attention and this is high art like that of Jim Jarmush or Radiohead. Very elegant indeed.

Shotgun Stories is a split screen experience. On one hand (or eye) you follow the very low-key story about one small 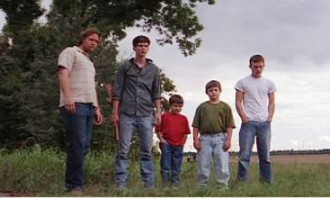 town family's boys attacking the other family's guys and vice versa while on the other hand you enjoy every second of those incredibly cool scenes and atmospheres. It is actually a very funny film.

Boy Hayes (Douglas Ligon) the mid one of the three brothers lives in run down van and based his entire lifestyle on cigarette-lighter plugged household devices like a cooler, a blender or a stereo. On one sunny day he's sitting on the riverside looking at the water enjoying the peace and quiet. An ugly coloured wire comes down from the parking van down to his spot where he's having a blender in front of him on a log. It is full with ice already and only needs some more vodka (?), and the moment of truth is ready to come now: ignition! Go! - and the blender roars into gear and the next moment the stereo starts playing - moment of peace, paradise on Earth for sure frontally lit by the orange of the setting sun.

In another great scene of the many Kid Hayes (youngest of the 3 boys) is talking to his older brother, Son about marrying the girl he's seeing. 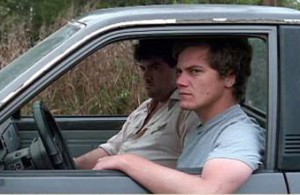 While he's busy smoking in the garden (with construction junk in the background) he's expressing his concern about taking care of someone for a lifetime and adds that he's also afraid because he doesn't even have a car, nor a house, he just lives in this tent - in that garden :) Scenes like this would make even medium-good movies very big fun to watch. Usually you'd have to go for a drug-involving movie to have this kind of quality of weird-situations, like those great scenes in True Romance with the famous Floyd character (Brad Pitt's best).

Shotgun Strories is not unique with its middle American milieu but is totally that with its aspect on it. Jeff Nichols is like generation next to great art-pioneer David Lynch who also came from the middle and also reached back for that middle American milieu and adopted it to his level of finest art (even coffee & pie based Twin Peaks' magic originates in this milieu). Nichols however applies this world in a different way - with much less irony, totally zero scrutiny and with a really great deal of heart and empathy.

It's actually remarkable that Jeff Nichols made a movie located in a small town in middle America (actually in his original home town, Little Rock) - without having the followings: someone who 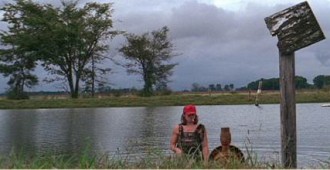 comes back from a big city, old-time prom queen, old-time love who is angry because he has left, local sheriff, local big guy (car dealer that our friend will have to compete with), angry parents, old time frustration or fear, reconstruction of a Civil War scene, etc. Shotgun Stories is just totally “Sweet Home Alabama” - free, having none of those common places and no degrading view on southern people either.

The strongest part of this film is most obviously the production design. It is just incredible. In the van the seat 's cover is ripped off, dirty yellow foam keeps up the shape and when the door opens a ray of sunlight falls right on a sign on the plastic of the door - it says “freedom”. It's a 3 seconds sub-story doing much more than just adding flavours to the flow. You could never do any better art direction than this. For Jeff Nichols however (who was production design and art department himself) all this richness of spectacular motives were no fruits of an accurate recreation of reality - but rather come from a bright and sensitive aspect of capturing Little Rockian reality. It's a sad and beautiful world there and Jeff Nichols had definitely managed to bring it on the big screen - without blowing it up.

Keeping it simple is quite big a thing for a low budget project. Keeping to the original vision could be quite a challenge since things can escalate or just go astray any moment. It couldn't be easy to get to work together Michael Shannon the the established actor (with some 30 features behind him) and local guys like Alan G. Wilkins performing the famous Shampoo character or his screenwriter friend Douglas Ligon w 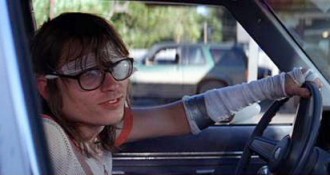 hom we'll definitely see again on big screen. These artists with different resumees just totally worked together - very well. As for Michael Shannon he was no way overwhelming the family-level low budget project (he was not like Chad the big actor in Dicillo's Living in Oblivion) but rather like older brother to everyone like best friend of Nichols' story.

This film is just very good to watch. It's just a very cool one with a big heart. It's very funny and despite the fact that dark drama comes into play too and when Michael Shannon is taking down a cheap tent or Douglas Ligon punches the stereo in his van with anger you'll experience very intense moments of grief for example it is still just a very a cheerful film. Like ground hockey playing on the rooftop in Clerks. One moment Michael Shannon spits on the coffin of their father (who left them and started a new family) and the next one his brother blames him for doing that - and it's already funny without overwriting the previous seriousness. This is a perfect contrapunction of dark drama and bright fun. 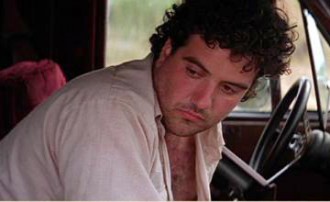 of course accuse this film saying that the drama part is what sells the cool and great scenes but this time you wouldn't be right since the drama part is kept at a very subtle and cool level (snake not shot, dead pet not shown, serious beating blacked out - yes, this is art!). Also, drama part has a very well defined role in the story. It is obviously a modelling of conflicts and not just one conflict. It's a tale-like conflict-analysis that definitely makes sense, but also, since this drama line physically takes its time out from the film it really effectively shows us what a big waste violent conflicts could be and are.

Shotgun Stories is a fine piece of art, a cool film - rich in details, very rich in life - and however small it just started out to be, a few years from now it'll definitely turn out to have been quite an influential one.
-JP-
2008-04-12