James Cameron is really a top director - film maker, film creator. Terminator 2 and Titanic are enormous works - especially Titanic, of course which is also a grand memorial for a magnificent ship and all those people - and also a historical research at a scientific level. But despite loving James Cameron who's motto could be "to make every film count" I really didn't think that Avatar would even be a pleasant "thing" to watch at all ...

What you could reasonably expect beforehand is that Avatar would be a spectacular one, and also that it'd have some nice big story 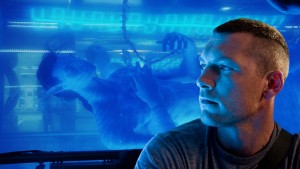 that'd touch hundreds of millions of people worldwide. At the same time however you could also expect that this would be it, this would be all, I mean if it's not a real movie you don't have to actually compare it to anything you've ever seen and liked before. Watching the first movies in the beginning of the (last) century was a great thing for everybody - you saw a train engine and it'd be a huge spectacle. The same thing could be happening now, and nobody would ever blame Cameron for forsaking old virtues and just creating a huge spectacle.

The Avatar however is no Terminator 3, and no Ocean's 12 or 13 either. Avatar is actually a great film. A really-really great experience that makes it all be worth. As with Terminator 2 and Titanic Cameron again created something HUGE and gigantic but still using his "handwriting" during creation. You can see and feel his hand. I mean the intimacy of the story, Titanic is the biggest picture ever - but all based on a story that is not a disaster movie but a very subtle love story. Could be just a short story. It'd not be a huge book but a fast reading one that you'd be reading in the subway being totally phased out and missing your stop. Avatar is exactly like that. It's a big picture again but based on something very-very soft and touchingly human. 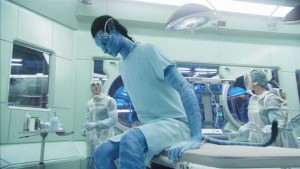 What you see is really magnificent - but there's a heart to it, an extremely human story that makes this huge thing pulse and breathe. The story is about an ex-marine who's legs don't function anymore owing to a spine injury. He applies for this mission to be the controlling mind to a brainless, soulless, lifeless motoric "body" - the avatar. This avatar is not human - it's a body that the locals "have", the Na'vis. Jake Sully (Sam Worthington) will so be one of the Na'vis - a Na'vi with a human mind, a human in a Na'vi body. The mission is simple he'll get the Na'vi people to move away from the spot where the expensive stuff can be mined from. He's an undercover agent - but will be affected by the Na'vi culture, and people and all.

If you think that this is a CGI tale - you'll just miss it. Tales are great (see The Little Mermaid) but strangely enough Avatar is extremely real. Avatar is about an invasion. It's about destroying Nature and a local culture in order to get the stuff they have. This is already good one but we're not there yet. Avatar is about looking at creatures as ALIENS (Sigourney Weaver doesn't just happen to be in it). This reflects the whole concept of civilisation as we know it - a territory that we cut out from nature and cover with cement and guard with arms. Nature is raw. Nature is scary, nature is ALIEN. You have to turn the wild into domestic to be safe. This is a very-very basic philosophy that is coded deep in our genes.

Avatar is a journey - from looking at the Na'vis and all the living creatures in the forest as ALIENS, to becoming one of them. It's a great journey - not only visually stunning. Animations even in 2D are very handy means of demonstrating or modelling something - and even of reasoning and persuading. 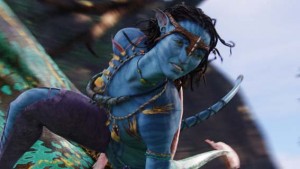 Well, Cameron's "3D programme" is really sneaking under your eyelids and skin and hacks your brain fast. If it's true that drastic or extremely new info or experience hitting you can make changes in your genes then Avatar will definitely do that. It is such a vast and brilliant argument. It's not just pointing out how wrong it is to look at other entities as ALIENS but thru 3D demonstration you can really feel it - under your skin. Movies are trips, they'll entertain you by getting you dozes of psychosis, letting you experience what it feels like being a secret agent, a famous or rich teen, a gangsta - you name it. What Cameron's picture is giving you is also a trip, but it's a much more intense one - and also it's not amplifying your stupidity, but derails you to a new track against all the stupid currents.

Avatar will let millions experience what otherwise would be quite out of reach - realizing the beauty of what seems extremely scary and disgusting and realizing the brutality of what seems just the civilized (capitalist) way, just the way to go. Once again Cameron has created not only a film but a whole world, and once again it's not only a BIG PICTURE but also a really beautiful one.
-jepe-
2009-12-16