The story, in short, goes like there’s been an amazing installation at gallery Puccs which kicked off with a smashing great art opening. Statements like this, however, rely upon our notion of “good Art”, which is a traditional one, to be honest, so it should be explained… 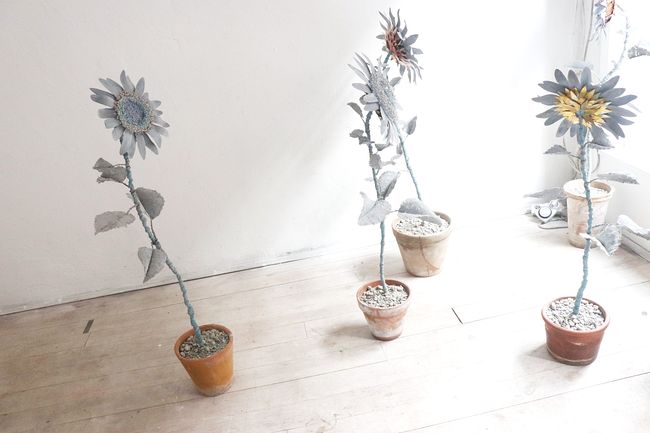 PUCCS is not exactly a gallery to begin with. Its actual name is “Puccs Contemporary Art”, which not only does NOT define it as a gallery in the traditional sense but elevates it from being “a container” for some happening to being the happening itself. Straightforward, lovable, also clever, isn’t it? Quite a concept!

Art openings are supposed to be cool, everywhere, but in most of the cases they are not. What we usually see is people holding onto analogies to the past, trying to repeat history, acting as if it was still viable, acting as if remaking it. PUCCS is one step better than this by default. Yet the coolness that usually comes about at PUCCS openings is not so much different from this. Cause the general behavior, the prevailing interpretation of the situation of the opening – both on the artists’ part and on the viewer’s – is ultimately “documentation first” (publicity first). That is, “we are writing history” (and becoming part of it). 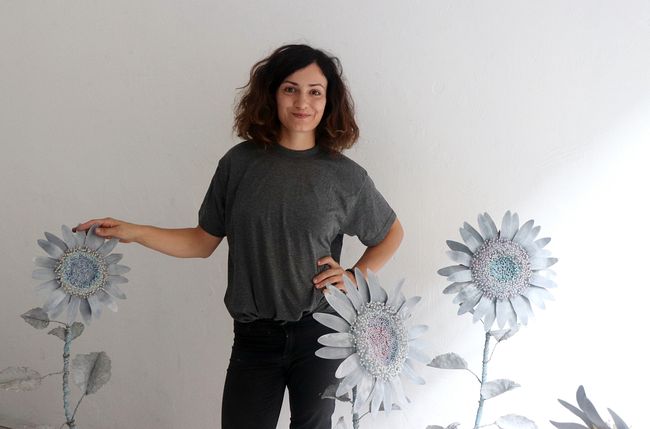 This mentality, this way of using and interpreting art events was a major (bad) development at the beginning of the 90s, in the then new “post” era (all “post” definitions of that era, including “postcolonialism”, fail, cause it was not an end of something, history, modernity, you name it, but a metamorphosis to a new stage).

It was also a predictably disastrous development. As Janos Sugar pointed it out back then – in a conversation at Tilos az A – people in the future, “future researchers”, would only see the past for what appeared in the media. That and that only. A kind of a hyperreality. This meant that whatever the works were like, whatever their actual effects on audiences and contemporary artists, it would NO LONGER matter. Thus the actual task that an artist had to perform was no longer to impress the audiences but to impress the press. And this is exactly what we see everywhere, ever since. 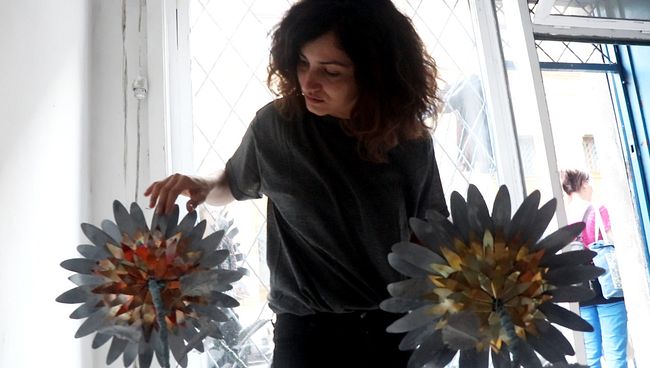 This attitude – “press first / documentation matters first” – will be noticeable time and again even at a PUCCS opening. But not at Francesca Menichelli’s – not that she was not conscious about press, it’s just that what matters first, is NOT the press bet her works, and her presence. So, instead of trying to place herself in the woven fabric of contemporary reports on art (of which art history is being made), she placed herself into the work – the installation that she created in the experimental white space of PUCCS. Instead of being there as an artist to receive congratulations, she was a live part of what she had created. A live act on the “set”.

Unlike most artists who play shy and hide behind art critiques and curators (and let them speak of their work like ventriloquists), she gave a fresh analysis of her own installation and its motifs on the spot. She did it in a colloquial style, just to make it even more liberating.

Francesca Menichelli established, and manifested new type of artistic freedom before our eyes, which is exactly what Bullet Shih, the architect and founder of PUCCS Contemporary Art, as well as a curator, had been preparing the landing field for. His motto, or house rule goes like this: “bring your stuff in, take your stuff out – and in the meantime make sure it doesn’t suck” reflects a new type of working attitude. Francesca Menichelli was outspokenly happy about the opportunity that Bullet Shih offered to her, she called it a “carte blanche”. She took very good use of the freedom she was granted.

She, first of all, put her sketch – as her “original vision” of this installation – on the wall. No cosmetics applied. Not everybody could have resisted the temptation to draw an even better looking sketch, taking advantage of the reverse engineering mode, or to get some coffee stains on it in order to make it radiate more with artistic freedom and originality. 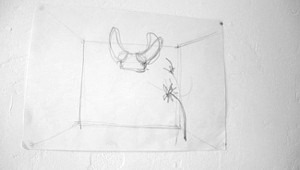 She just used her original sketch as it was, and in her conversations during the evening she would refer to it as “my vision”, adding that she woke up and had this vision, and she liked it, started working on it, and that’s how the installation came about. Without “justification” (as she put it).

:: the scene: flowers and a beastly “entity”

The "scene" she created was a gray metal sunflower field, like after a disaster – a sci-fi scene, so to speak. The sunflowers, however, were live and beautiful. Despite the grayness, they had their intact beauty – they had colorful copper petals. Mutant beauty. Resilient beauty. That’s how my mind dubbed it. The actual title, "Calma Baby" did not refer to the installation, it simply meant, like a diary note, for herself, "slow down" :) 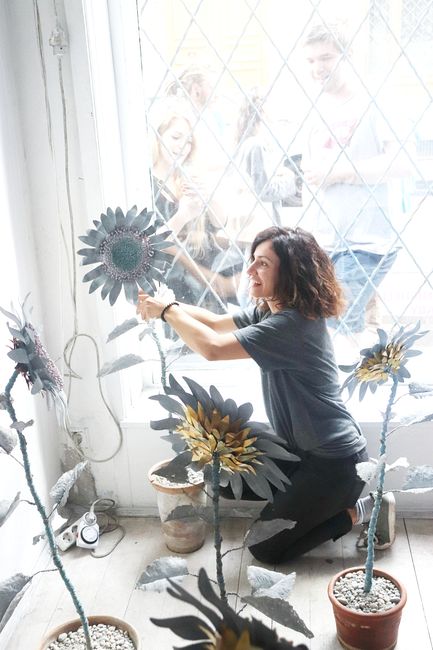 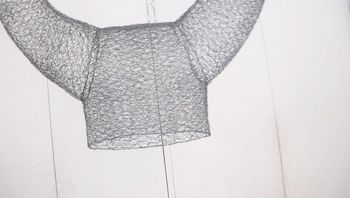 She added that it is about “beastliness” or “bestiality”, an animalistic quality (without the sense of violence and aggressiveness), and that this is the key to the "socks with horns" that her models would wear in her former shows. The models couldn’t see properly, and so they were in a wild and blunt state of mind, so to speak, and this is what she liked about it, this is what she staged, a blunt, instinctive, or animalistic state of mind, which could also be viewed as a synonym to Dionysian, but Menichelli’s own context is richer.

:: the max out of PUCCS's potentials

PUCCS Contemporary Art is an amazing instrument, which some artists – of which Francesca Menichelli is a perfect example – can play beautifully. It is like the “water of life” in Lynch’s Dune. Many people have tried drinking of it, that is, using its powers. Many people have tried. “They tried and failed?” – asks Paul Atreides – no, “they tried and died”, comes the answer from the “bene gesserit” peer. 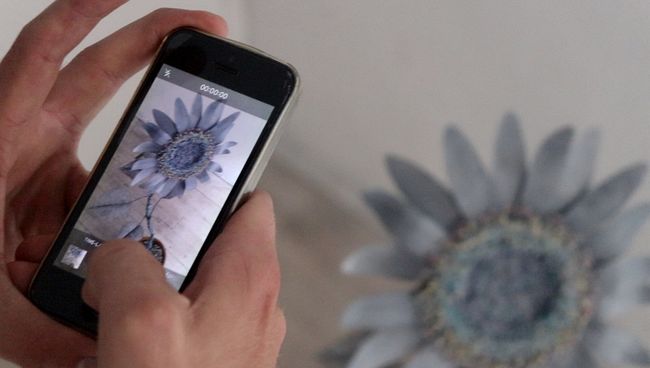 In PUCCS’s case, many people have tried – they tried and performed well. What makes Francesca Menichelli different – even outstanding – is that she performed perfectly. Instead of using PUCCS as one gallery of the many, she used it as a unique thing, and made a unique show at which the art-opening-goers, instead of being alienated by trendy fanciness and academism, were treated like friends, and inspired as fellow-artists.

↓ a video of the opening: 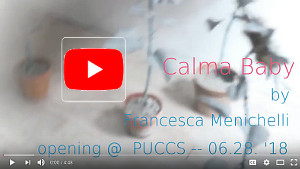